A battery-operated, dual-sensor, outdoor movement detector designed to detect intruders and wirelessly transmit the information to a Roboguard Base station.

A portable 8 zone, 4 output, base-station used to receive and annunciation signals from up to 8 Roboguard Sensors. The HQ can also be wired to a siren and/or an up-line alarm panel. Arm/disarm with a roboguard remote.

The Alarm Unit can supervise and monitor up to four Roboguards, with individual intruder detected, tamper and status LED’s.The Alarm Unit has six relay switches that can be set to either N/O or N/C contacts.

Each of the guards can be individually switched on or off.

Switching off does NOT disable the status or the tamper monitoring. 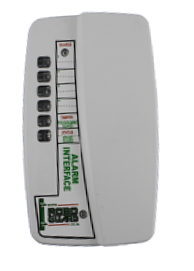 •The HQ can monitor eight RoboGuards with individual intruder detected tamper detect and supervision LED’s together with audible warning sounds.

•The HQ has five output switches to connect to other devices one that can switch 1AMP the other four 40ma.[siren cell module lights burglar alarm radio transmitter]

•The HQ functions off its resident NiMH 6v battery and has fifty hours of autonomy with a twenty five hour charge cycle.

•Incorporated with the HQ is the battery charger a removable cable for the output switches and an Allan key to disassemble.

•Each RoboGuard senses the presence of a intruder at 20 meters in an arc of 110°.

•Anti-tamper switch protects RoboGuard even when it is switched off.

•Lenses made with Poly IR6 a U.S. patented material and carry a 10 year warranty against ultra-violet damage.

•Due to wireless nature totally impervious to lightning. 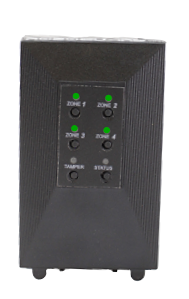 A handheld remote transmitter used as a panic button and remote control for radio base-stations. 4-button and 6-button versions are available

A Roboguard code repeater that can be used to extend the radio range of roboguard systems.

he Repeater station is constructed from a Universal Transmitter and a Universal receiver wired together and configured correctly.

The Repeater will re-transmit all Roboguard signals except Remote code received by the receiver after a user-programmed delay.

Unfortunately at the moment a site is limited to 1 general repeater.It is possible to configure a selective repeater using a URX or keypad-receiver for up to 4 Roboguards or 2 Remote buttons. In this case the number of repeaters and range is theoretically unlimited (this is not recommended for the DIY enthusiast).

The repeater will NOT workwith non-Roboguard products unless they communicate via a universal transmitter.

Power pack HQ interface to external devices such as a siren and/or alarm panel. A complete solution with 7A/h battery, 16VDC  transformer, tele-cable, DC power to HQ and 5 relay out-put PCB.  Available in Black and White. 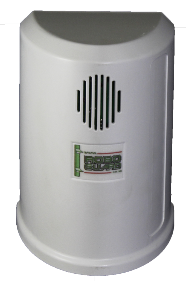 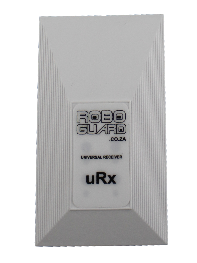 •The uRx is used as the receiver for the Keypad, uTx (Repeater Station) and other Roboguard decoders.

•The uRx can be "taught" to respond to Roboguard, Intruder and Remote Tx Signals.

•Available in a latching format 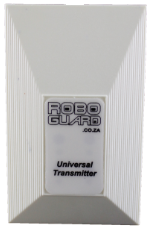 •Each universal transmitter has four inputs that can be wired in from the external product.

•The universal transmitter will monitor these inputs (alarm outputs from the external product) and will send an intruder or tamper signal depending on its configuration.

•The Universal transmitter can also be configured to emulate the Roboguard hand held remote transmitters.

•The Universal transmitter can be configured as a repeater station with the addition of a Universal Receiver. In this configuration the transmitter will transmit any received roboguard signal with a user configured delay.

•This is most useful for sites where radio signal transmission is problematic. 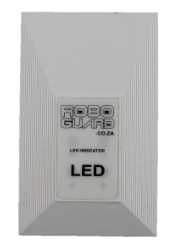 The Visual Indicator is an interface module between the HQ and an LED which continually displays the Arm/DIsarm status on the HQ on the LED.

The bracket can be mounted to any surface and allows the installer to swivel the Roboguard and aim the beams in the required direction. 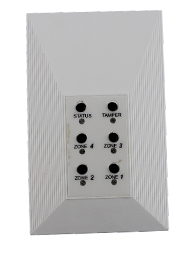 • Keypad is powered by 12 volts DC for easy installation with existing alarm panels. 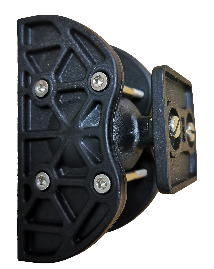